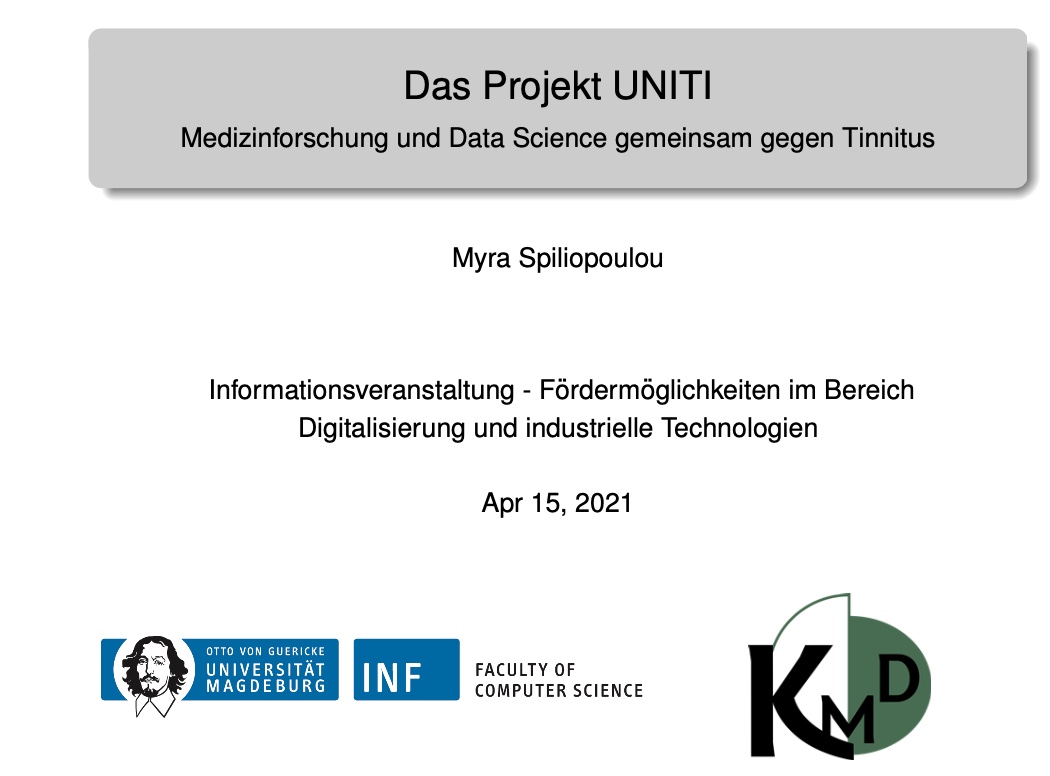 On the 15th of April, Prof. Myra Spiliopoulou (Professor at Magdeburg University) had the opportunity to present UNITI project at an event organised by the EU-Hochschulnetzwerk Sachsen-Anhalt and the Nationale Kontaktstelle Digitale und Industrielle Technologien (NKS DIT). During this event Myra presented the success story of UNITI stressing on the following key points:

The full presentation is available here.

The world's largest tinnitus study UNITI, funded by the EU, will start soon. The study centers in Athens, Greece, Granada, Spain, Leuven, Belgium, Berlin and Regensburg, Germany, are therefore currently looking for patients between the ages of 18 and 80 with chronic tinnitus who would like to participate in a clinical trial to investigate the effectiveness of single or combination treatments for tinnitus.

In this context, the clinics in Leuven, Berlin and Granada invite interested patients to take part in the so-called pre-screening, where it should be determined whether you are generally suitable for participation in the UNITI study. To participate in our anonymous online survey, please follow this link (please use other browsers instead of Internet Explorer!) 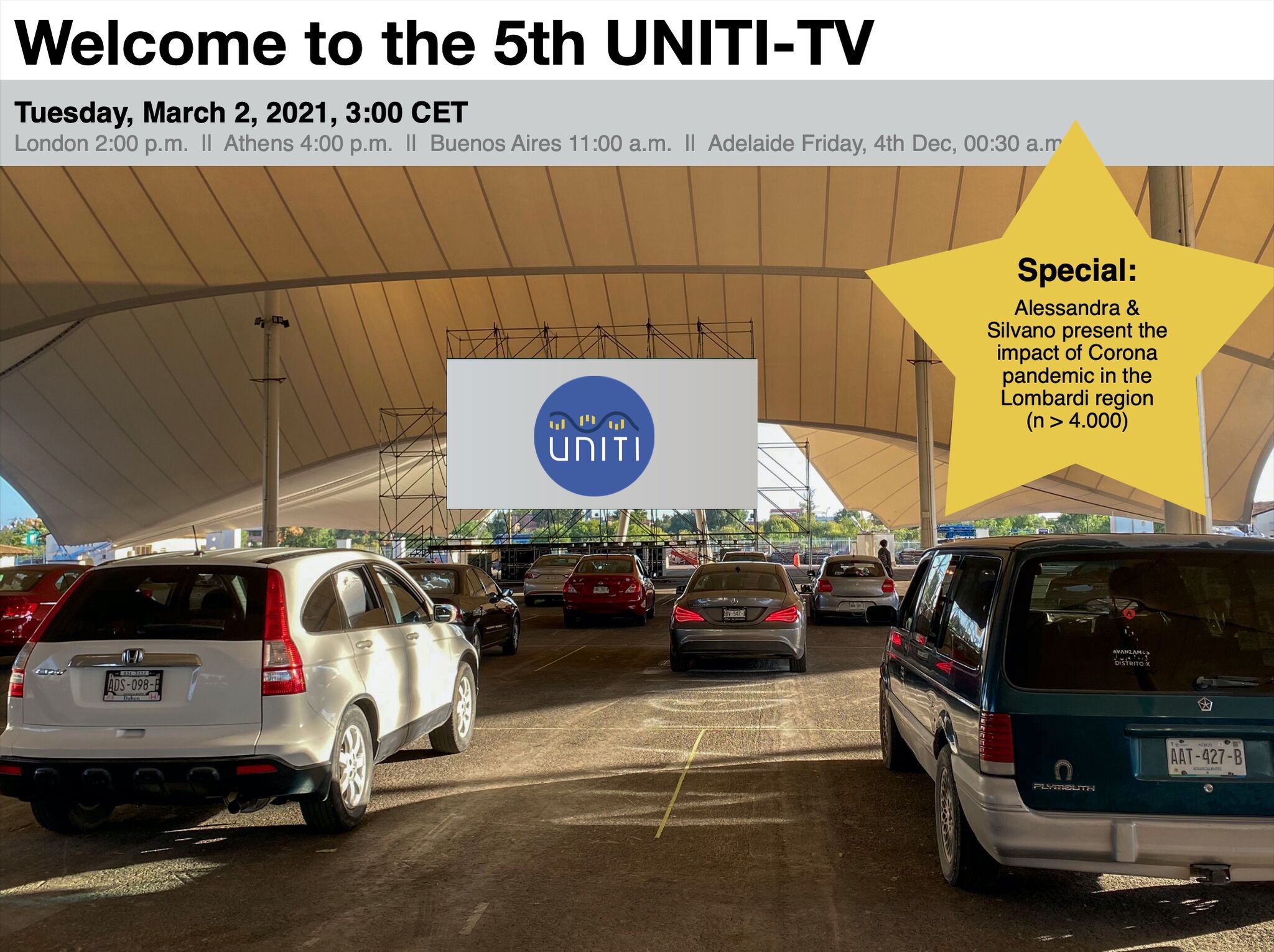 On 2nd March, the UNITI team was grateful to convene again, and discuss all ongoing project processes and advancements of our action. It has already been the 5th edition of UNITI TV!

Currently, there is a variety of exciting developments, with large data analysis of scientific data on tinnitus (one pilar of the UNITI study) ongoing and showing first results, as well as busy preparations of the UNITI clinical trial, with pre-screening already started in some clinical centres, and initiated soon in the others. In case of enquiries concerning the status of our work, feel free to contact us!

Everyone is already happy for our next consortium update in a few months, UNITI TV no. 6! 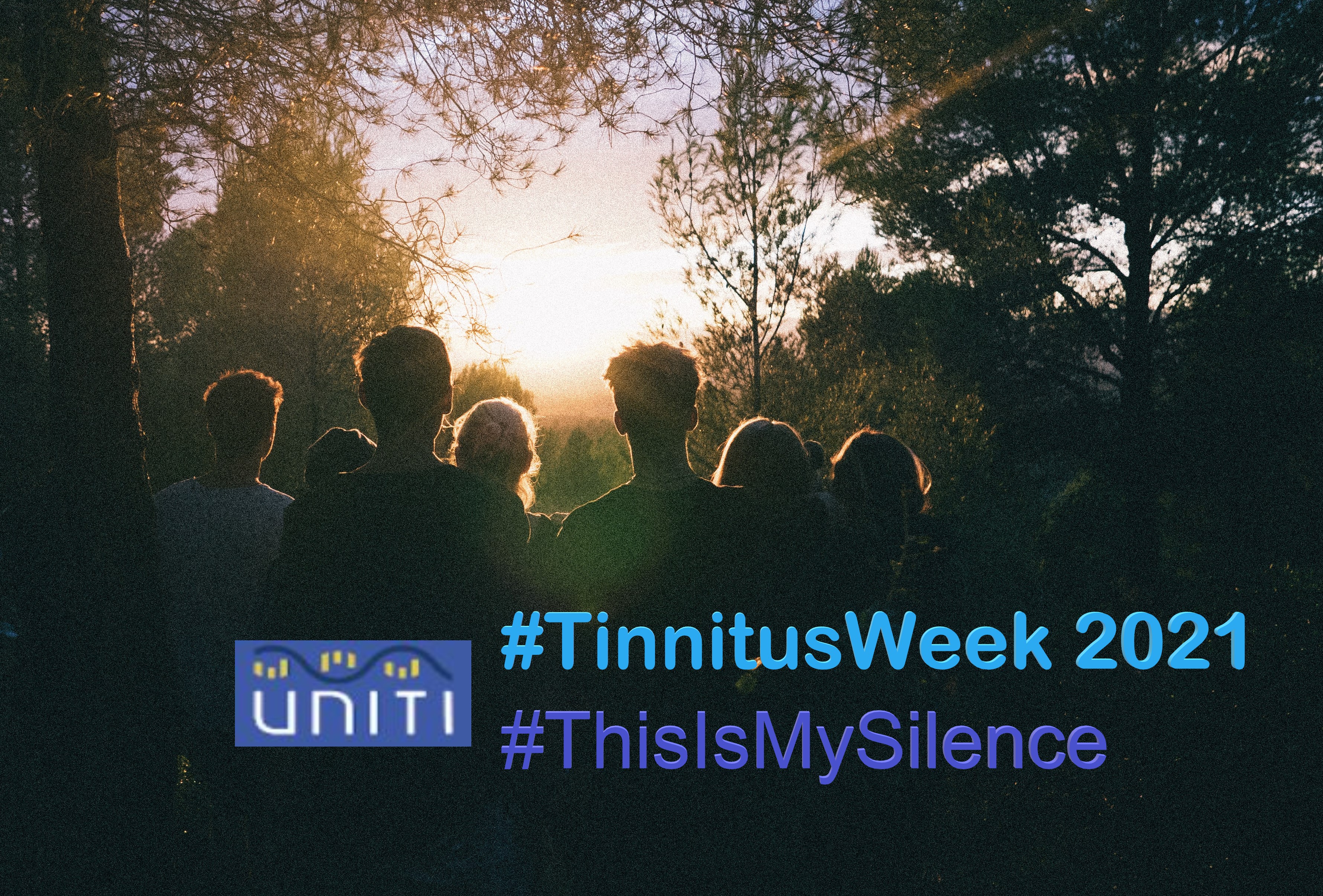 This year's International Tinnitus Awareness Week #TinnitusWeek currently takes place, almost fully virtual, but with an even greater number of partners than ever before!
Under the motto #ThisIsMySilence, many organisations - most prominently the British Tinnitus Association (BTA) - and countless individuals worldwide share their experiences with tinnitus, and express what needs to be done from their point of view.

On our part, with our EU funded research, we aim at a Unification of Treatments and Interventions for Tinnitus Patients (UNITI). Currently, preparations for the UNITI tinnitus clinical trial - one of the largest ever - are in the later stages. Stay tuned for updates!

At the end of January, UNITI and its ambitions and current progress was presented at the yearly Winter Retreat of our UNITI Consortium Partner the University Hospital of Würzburg, Germany, and its Institute for Clinical Epidemiology and Biometry.

We thank the team very much indeed for their most fruitful engagement, especially in the areas of app programming and data analysis - and for presenting UNITI to their colleagues in other areas!